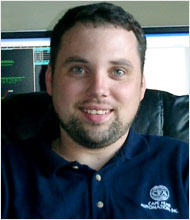 Peter is a Wilmington Native who started Cape Fear Automation in 2002 to provide superior quality machining and manufacturing products.

Pete Merritt founded Cape Fear Design in 2002 as a response to the growing demand for custom machine design in the Wilmington area.

He witnessed steady growth in his new business to the point that, in 2005, the company became incorporated as Cape Fear Automation, Inc. and expanded its facilities and operations.

Pete is a native of Wilmington, NC and has spent over a decade working with the businesses in the Cape Fear region and surrounding areas. His commitment to superior customer service is what sets Cape Fear Automation apart from the competition.